On our last day in London we decided to design our own tour. We wanted something that would blend the best of both worlds: seeing the sites and eating. Thus, the Foodie Tour was born.

Our excursion began in London’s East End at a quirky little spot on Brick Lane. We were first tipped off to Cereal Killer Cafe from a Mashable article announcing its’ opening. A celebration of all things cereal, it’s a one of a kind dining experience. Memorabilia line the walls – everything from vintage cereal boxes, to old cereal box toys, to cereal themed license plates, to pieces of artwork crafted entirely out of bits of cereal. It’s a complete cereal experience that induces a sense of childhood nostalgia.

So now that you can picture the place, let’s talk food. The menu boasts 120 flavors of cereal from around the world, 30 varieties of milk and 20 delectable toppings. As if narrowing it down to one cereal/milk combo isn’t difficult enough, there’s a cereal cocktail menu. These gourmet breakfast bowls are unique creations from the mind {and mouths} of the Cereal Killer staff.  And for the diner who can’t find the mix that’s just perfect for them, there’s the option to create your own cereal cocktail.

As tempting as it was to go with the childhood favorites, and believe me they were all there, I knew that in a place like this I had to mix it up at least a little bit. After much deliberation I decided on the hazelnut Kraze cereal with hazelnut milk and banana toppings. Adrienne was feeling adventurous and went with the Don’t Have a Cinnamon cocktail, which was a mashup of Golden Grahams, Apple Zings and Curiously Cinnamon cereals, all drizzled with honey and finished off with almond milk.

A cozy little spot with boxes of cereal from floor to ceiling. 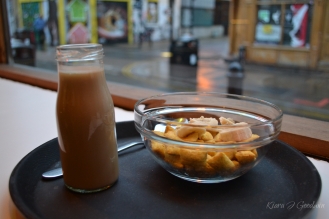 Taking a quick pic before it disappeared.

Cereal inspired art. Who knew that was a thing?

Next stop was Hummingbird Bakery in Notting Hill. Located in the heart of Portobello Road Market, Hummingbird is a crowd favorite. It was a rainy day, but I’ve always thought there is something strangely comforting about a gray London day, so that didn’t put a damper on our tour. We took our time meandering through the stores and past the stalls, slowly working down the street until we found the bakery.

The space was tight and the glass cases foggy from the humid weather and all the eager shoppers pressing their faces closer, debating which treat would satisfy their sweet tooth that day. I’m a naturally indecisive person, especially when it comes to food {I honestly want to order the entire menu and try a bite of each}, so I debated over those little cupcakes for quite awhile before landing on the red velvet. You can’t go wrong with chocolate and cream cheese, amiright? The Hummingbird icing has a buttery quality to it, without being too overwhelming, and I enjoyed every sweet and creamy bite. 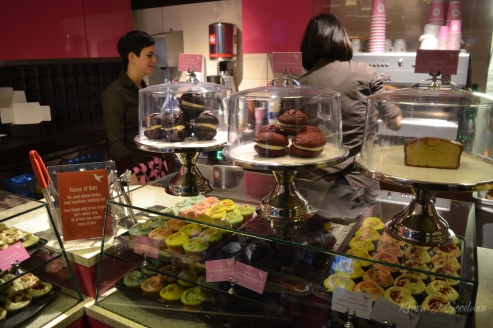 So many delicious choices!

Our tour was going really well. We’d managed to squeeze in a little sightseeing, a little shopping and a whole lot of eating, all before noon. After strolling through the rest of the market we headed back to the Tube station and took a ride to Southwark. Curving along the South Bank, we took in all the sites, admiring Millennium Bridge, Shakespeare’s Globe Theater and the Tate Modern Museum. After a little bit of time, and a lot of photos, we found ourselves in Borough Market – a foodie paradise.

My decidedly indecisive senses were overwhelmed. Choosing what to eat for lunch was a momentous decision that day. The only natural thing to do was to fully assess the situation first. As we took a lap around the market I tried to take it all in. There was a constant buzz as vendors spoke with shoppers, taking orders and explaining their delicacies. Everywhere I looked was edible art – pink and white marbled meats were hanging from hooks or sitting on ice, wheels of cheese in a variety of hues, shapes and sizes looked like decorations atop old wooden tables, baskets covered in white cloths were overflowing with an assortment of fluffy breads, and the stacks of desserts were so numerous it was comical.

Then there were the smells – first there was a waft of mulled wine, a few steps later the aroma of fresh pasta, at the next stall we caught scents of pesto, then the distinct smell of bison burgers sizzling on the grill, which quickly dissolved into the sweetness of fresh pastries. Needless to say, it was heavenly.

After a lap or two I made my first choice: a solid hunk of olive oil and rosemary bread. Well the bread needed some cheese, and if I was adding cheese I figured I should definitely grab some meat. I quickly found a vendor to buy a small sliver of brie from and another who was willing to shave off a few paper-thin slices of prosciutto. It was salty, it was doughy, it was creamy, and it was so fresh.

After my appetizer I was ready for the main dish. I’d been eyeing a specific entree on my first round, so I decided to circle back. The line was long, but I took that to be a sign of a popular, and delicious, choice. I was right. The scallops with bacon and sprouts did not disappoint. Perfectly cooked, biting into each scallop was a treat. The bacon added a crispy texture and a salty flavor that was welcome. They were served on a bed of sprouts and chives that had been sautéed just enough to add flavor without sacrificing the classic crunch.

In between all this goodness I also snagged a bite of Adrienne’s freshly cooked Italian ravioli {to die for}, more bread dipped in truffle oil and a nibble of a few other samples as we browsed.

At this point in the tour my food baby was approaching the seven month mark, and I was satisfied. However, I couldn’t help but feel like I’d just drank from a salt shaker. I need to wash the meal down with something, and a cup of freshly squeezed mango-orange juice seemed like just the ticket. It was a refreshing way to end the meal. It was also a good thing I used the last of my cash on that drink or I probably would have continued and eaten myself into a food coma.

Caught in the act. No shame. 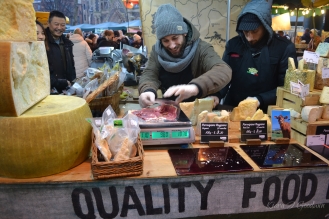 Adrienne enjoying every bite. Yeah, it was that good.

The final stop on the Foodie Tour was actually unintentional. At this point we were so stuffed that we needed to walk it off and figured hitting up another spot on the “to-see” list, the Victoria & Albert Museum, was a good idea. After making it through about two exhibits a heavy pain creeped into our legs and backs, and the miles we’d walked were fully realized.

At this point in the tour a pitstop was long overdue. The only place to rest our achey feet was the museum cafe, which was set up like a dining hall and included a full tea service. English tea was the final item on the Foodie Tour list, so it was a necessity. With feet free of boots and propped up on chairs {really ladylike, I know}, we relaxed and enjoyed our tea. It was the icing on the day’s sublimely delicious cake. Oh yeah, we split a piece of that too – carrot to be exact.

Exploring a city while simultaneously enjoying some of the best food it has to offer is an amazing experience and I highly recommend it. I think it’s safe to say that the London Foodie Tour was a success. I may have gained 10 pounds in one day, but it was worth every bite.